Have you made a "One Block Wonder"? Believe it or not, this table runner is made with the same block only in the form of a square instead of a hexagon! The "What's In The Box?" table runner is only 5 blocks but finishes at about 50"long. It can be lengthened or shortened by changing the number of blocks you make. Most who take the class can finish 5 blocks in class and only have to add borders to finish the table-runner when they get home.

Choose a food-themed or holiday runner like the Halloween one pictured at the top or the
'Floating Boxes" optical-illusion quilt using novelty fabrics shown below. And, it's a great stash-buster! All you need is 1 1/2" strips in light, medium and dark of one color to create the sides of the 'box' and a small amount of fabric for the inside. These are show-stoppers!

Contact me if you'd like to have me at your guild or with a group of friends at your home.
Posted by Rabid Quilter from California at 9:46 PM No comments:

A (somewhat) Modern Take on a Block Exchange

I belong to a wonderful group of 15 quilters who exchange blocks in June of each year then 'reveal' the quilt they've made at a fun, all-day party in December. We are called the Calendar Girls and we've been together for 15 years. 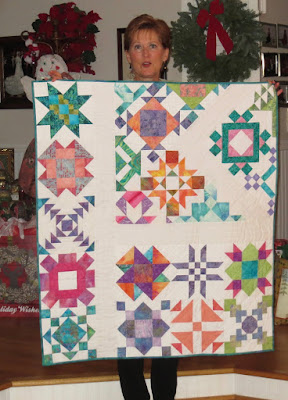 For our block this year, we were supposed to make 10" blocks using a white background color with batik prints in "tropical fruit" colors. I've had this quilt finished for a couple of months but couldn't reveal it before our party which was last week. I wanted to try something modern and this is what I came up with.

Look closely and you can see that I cut up several of the blocks which I hoped my quilting buddies' wouldn't mind! I incorporated the leftovers into the backing fabric and everyone was OK with that--LOL! 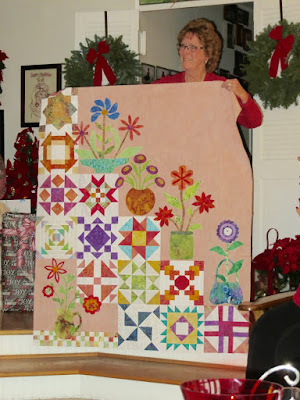 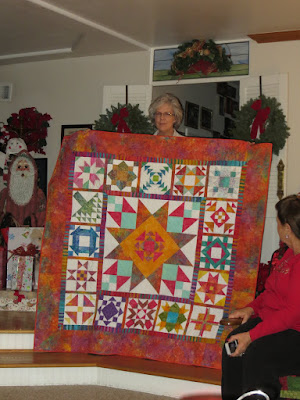 Here are a couple of the other quilts that were made with the same blocks. Kim and Diana's quilts are BEAUTIFUL and so very different from mine. Don't you all want to try a block exchange now?
Posted by Rabid Quilter from California at 4:54 PM No comments: 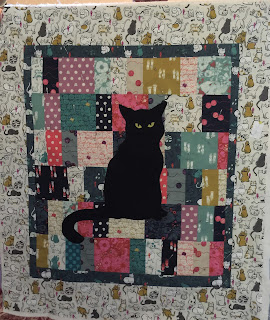 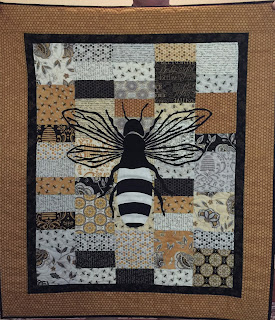 It isn't often I finish something. I START new projects all the time but finish? --Quilted, bound and with a label? Oh boy--that doesn't happen often. I blame my penchant for  going to quilt shows and subscribing to a myriad of quilting magazines. They inspire me and make me go "SQUIRREL" all the time! So, I decided I needed to finish these 2 small projects which will be a new class for me to teach.
On the right is, "I'm Your Kitty" and on the left, "Who's Your Honey". The title of the class will be "Charming Silhouette" because they use one Charm Pack, less than a yard of border fabric plus a silhouette I provide. These wall-hangings measure about 35" x 40", a nice size to finish and hang for all to enjoy!

Posted by Rabid Quilter from California at 9:42 PM No comments:

It's county fair time where I live and I entered two quilts to be exhibited. It seemed to be a 'blackbird' year for me for some reason and I really love both of these quilts although they're quite different. I earned a 1st in my division with my "Birds on a Wire" quilt,  but was very pleased that it also got a "2nd Best Over All" ribbon the best ribbon I've ever gotten! 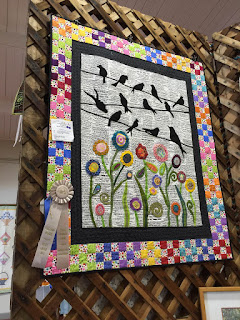 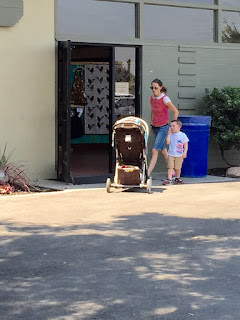 My other quilt got a 4th place but the placement of the quilt within the show made up for it. Here's a view of it as I walked up to the entrance of the hall--the 1st quilt you see when you walk in! I adore this Lorna McMahon pattern of Sew Fresh Quilts! 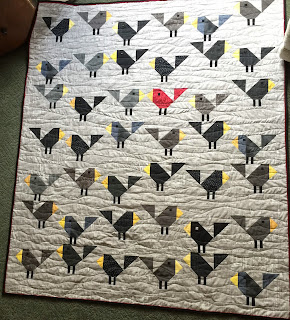 Posted by Rabid Quilter from California at 7:21 PM No comments:

I hope you have experienced a quilting retreat. Two, three or more days of concentrating on nothing but your favorite pastime--quilting!! For 15 years now, about 10 of my quilting buddies and I have been traveling about 4 hours north to attend a "Linda Ballard Mystery". You bring the amount of fabric she suggests not knowing what you'll be making and take one step at a time until the quilt is revealed! 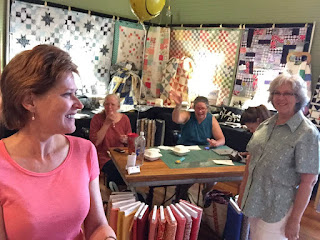 I've done over 30 of these mysteries so I don't always participate and this was one of those times when I did my own thing. I brought 5 projects that were at various points of completion from not started to ready to quilt. . .  and wouldn't you know it. . .  I bought a kit from the vendor present (Morning Star Quilts from Chico CA) and made that too! 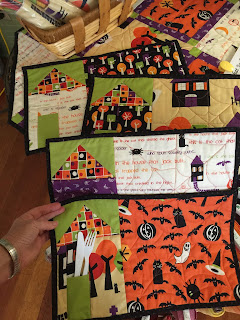 Aren't these cute Halloween placemats? There's a hexagon table-topper too! Took me less than 2 hours to make the tops and backs before quilting! 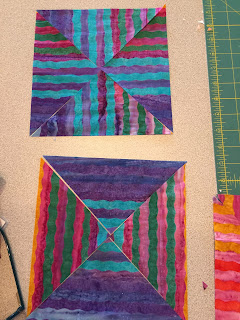 I watched a tutorial on Missouri Star recently on how to cut striped fabrics to make "T" and "O" blocks. I tried it at the retreat and it worked so well I shared it with the rest of the retreat participants. You can see it on the "Quartered Stripes" tutorial here.

Every one of us put deposits down on next year's retreat starting 360 days from now!

Now go check out what everyone else has to show on Judy's blog.
Posted by Rabid Quilter from California at 9:19 PM No comments: 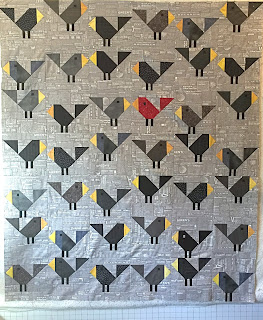 I follow a few quilt blogs and one I really love is at SewFreshQuilts. "Let's Bee Social" is written by Lorna McMahon who has a wonderful spirit and wit and obviously loves animals, as I do. Her patterns are well-written and, best of all, they can be (very reasonably) purchased and immediately printed on your home printer--instant gratification!


Her Blackbird pattern really caught my eye and I just had to make one. Here's my pre-quilted rendition. Isn't it cute? 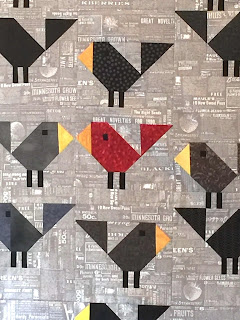 There are a LOT of tiny pieces in her pattern, the blocks of which measure 6" square !! I have to admit that I drafted a larger version so mine are 9" square. I call the quilt "Bird Seed" because the background fabric is 'newsprint' advertising seeds and flowers--something I didn't realize until I was cutting it up.


Posted by Rabid Quilter from California at 12:59 PM 7 comments:

I think most people have obsessions, at least in the minimal sense. You might be obsessed with a delicious food you believe you can't do without (although, I'll bet you could), or a sports team, (Go GIANTS!!) or a physical pastime (I know some really "dedicated" cyclists). 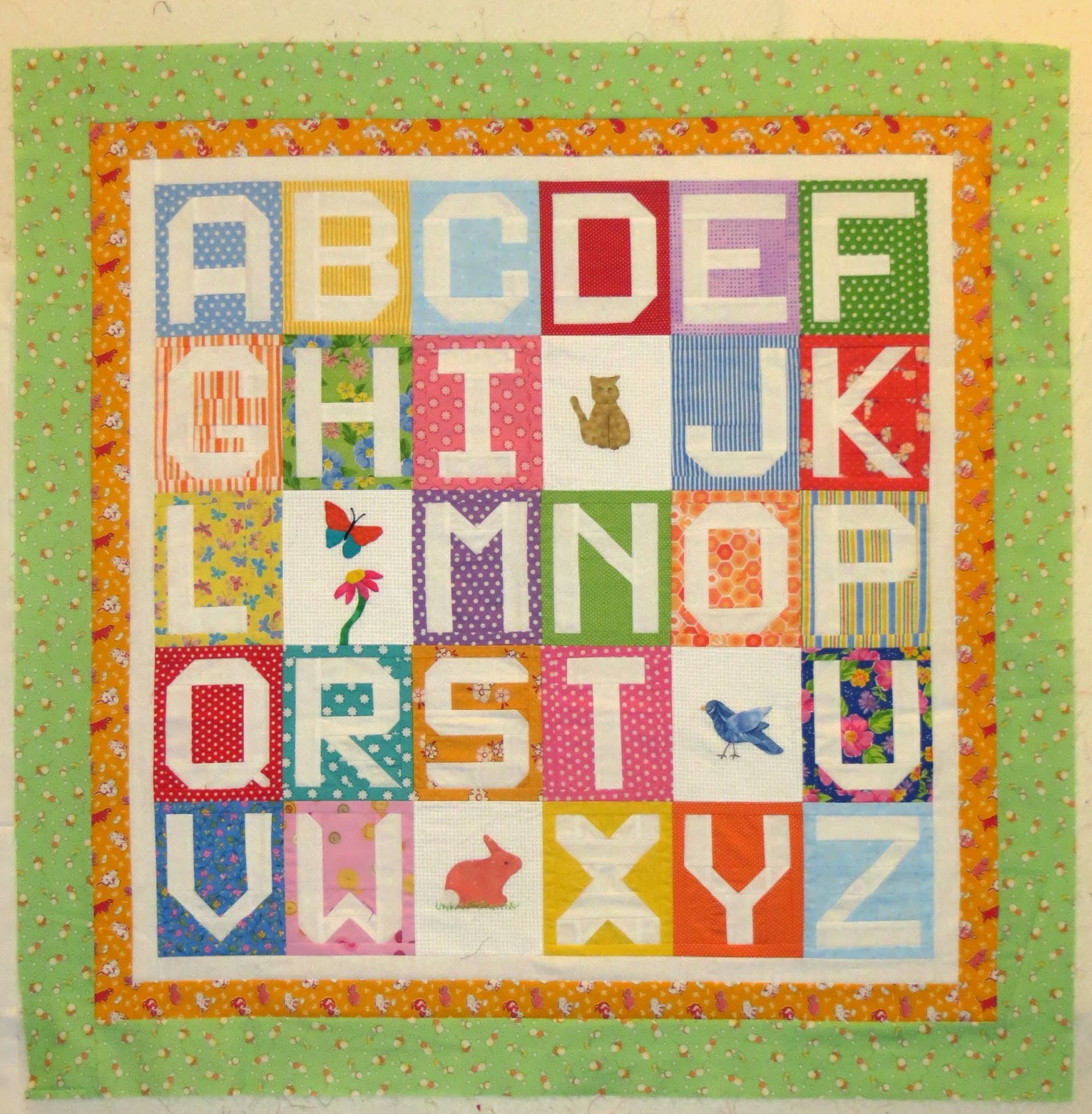 Personally, I've always been ga-ga for alphabets and numbers. Anything with a digit, word, name, especially if it's a fun or unusual font. Last year I happened upon a Moda blog hop. Three blogs a day for a couple of weeks and a pattern for a letter of the alphabet at every site--Yippee!! I rose early every morning to download the patterns, kept them in a pretty pink folder, collected striped and polka-dotted fabric from my stash waiting for them all to be revealed before I began.

As an added bonus, they included patterns for not only numbers from 0-9 but several punctuation marks too! I had to make the quilt even though I had no earthly need for an alphabet quilt. I know no one having a baby, don't even have a sister OR a SIL to anticipate a niece or nephew. Yes, I have grown children of childbearing age and they even have spouses (7 years each) but, nahh, that's too much to hope for.

Still, I made this adorable quilt anyway and I enjoyed the process SO much! Those blocks are 4 1/2" x 5 1/2" and were pretty darned tedious to make--but I loved every 1"x 5" border strip on every block and every 1"corner square to round out some of the letters. Those 4 non-letter blocks are tiny hand appliqued critters designed by me (I didn't like the pieced block in the pattern).

It's now pinned and ready to quilt (with, what else? a 'cheater' alphabet fabric on the back!) Who will be the lucky recipient? One can only hope. 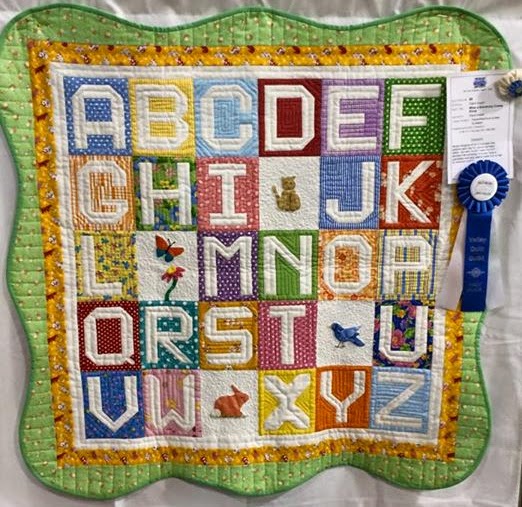 This is my finished alphabet quilt, only 40" x 40", winning a blue ribbon at my own Valley Quilt Guild's quilt show in March. The title of the quilt is, "For When A Grandbaby Comes Along". When our daughter saw this quilt, she fell in love with it. I raised an eyebrow and told her it could be hers one day. Her reply was, "I think we're going to have to seriously discuss having a baby!"

Posted by Rabid Quilter from California at 8:30 PM 1 comment:

Welcome to my Blog!

One charm pack and a yard of background! 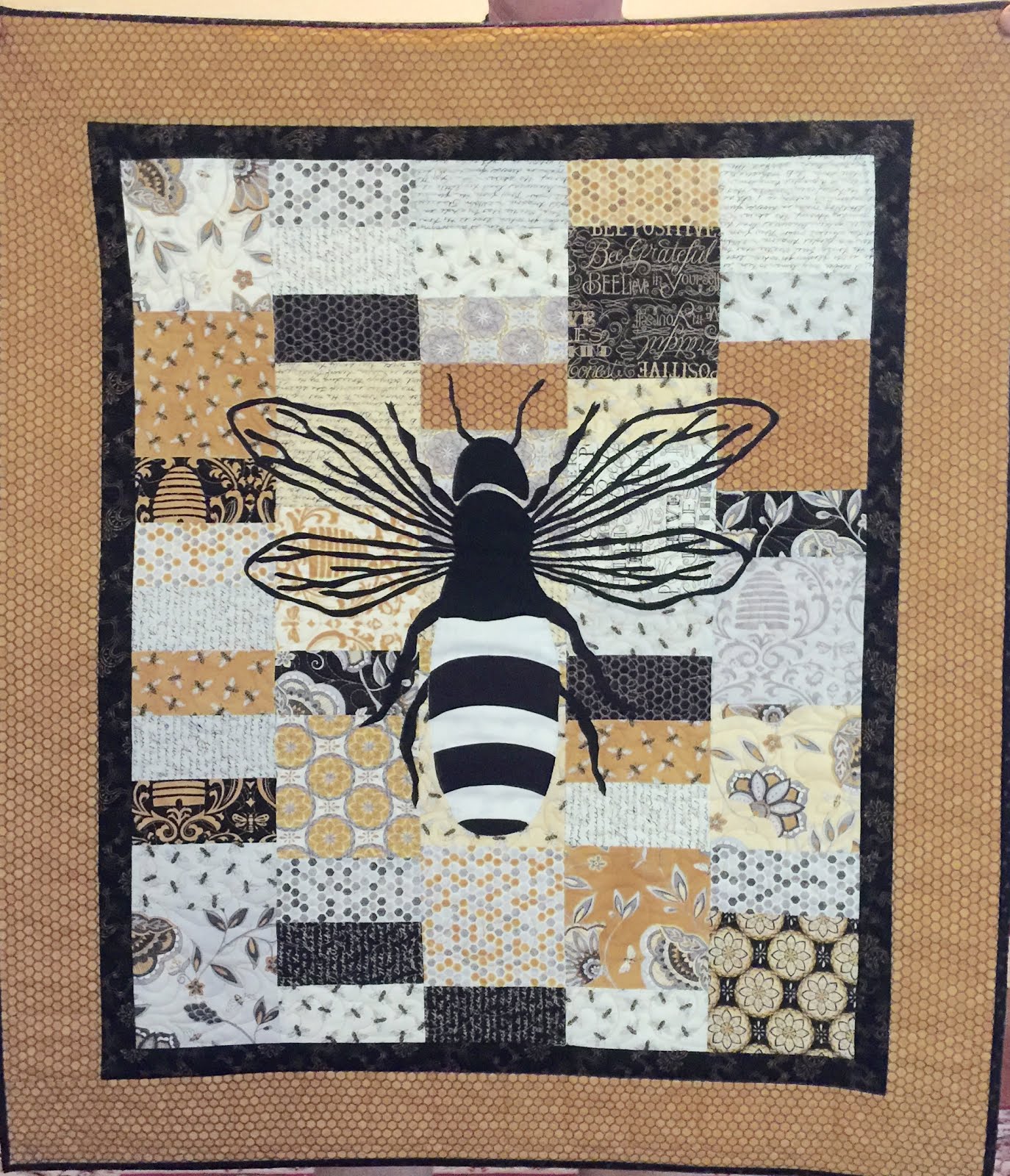 What's In The Box?

Rabid Quilter from California
I'm a passionate quilter born and raised in Northern California. I'm active in 3 quilt guilds, past president of one! I've worked in a quilt shop, collect antique quilts, lecture and teach quilting and am a member of the Calendar Girls, a block exchanging and very fun group! I'm inspired by my fellow quilters, quilt shows and quilting magazines so I always have several quilt projects going at a time. Yes, I'm a Rabid Quilter!

Contact me by email: STEELEDOME@GMAIL.COM
"Antique Quilts: A Trunkshow of History". You'll learn a lot about the history of fabric and quilting in America while viewing 2 dozen quilts dated from 1846-1950 some purchased from junk shops for as little as $5, others at auction for a whole lot more!

href="http://dianesteelequilts.blogspot.com/2007/06/classes-for-you.html">
What's in the Box?

2020 Schedule of Lectures and Classes